Along with the rest of Messenia, the town gained its independence from the Spartans in 369 BC. During the 4th century BC, Methoni was elaborately fortified and continued to remain autonomous well into the Imperial Roman era, when it enjoyed the favor of some emperors. During the Byzantine years it continued to remain a remarkable harbor and one of the most important cities of the Peloponnese, seat of a bishopric. It was used by the Byzantines and also used by pirates. In 1209 it was taken over by the Venetians and became one of the most important fortified cities in the Mediterranean and called Modon. 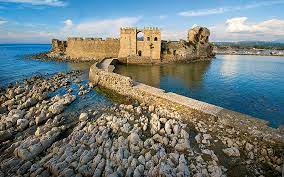 The Old Navarino castle is a 13th-century Frankish fortress near Pylos, Greece. It is one of two castles guarding the strategic bay on which it sits; the other is the Ottoman-built New Navarino fortress. In juxtaposition with the latter, it is frequently known simply as Palaiokastro 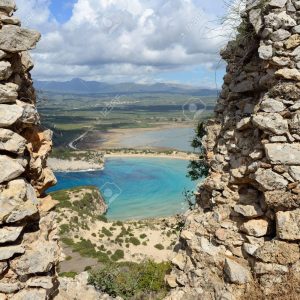 The impressive hexagonal Niokastro, more like a fort than a castle, functions as a centre of submarine archaeological research and a museum. At certain points the castle functioned as a mosque and then a church. 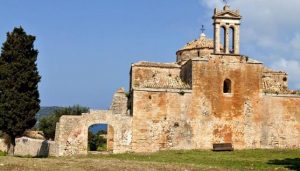 Founded in the 4th century BC, Kyparissia is crowned by a fortress with two defensive walls and a tower that was built in the Byzantine period.

The city was built in 369 BC according to the Hippodamian grid system, so named after Hippodamus of Miletus, who conceived the idea that a town plan should reflect a rational and democratic social order. Fortifications Stretching for 9 km, the massive fortification walls of Ancient Messini are among the best preserved in Greece and – according to Pausanias – were the strongest in antiquity.

The cradle of the Olympic Games – first held in 776 BC, and a timeless shrine to the ideals of virtue, honor, peace and noble competition, ancient Olympia is a UNESCO World Heritage Site famous for its magnificent stadium and

the substantial remains of two. 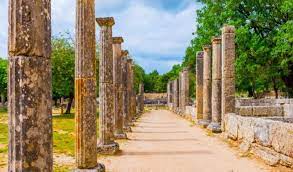 The elaborate two-story complex (13th – 12th century BC) with royal apartments and workshops is unique among Mycenaean palaces due to its complete lack of defensive walls. The Palace of Nestor, the wise old king of Homeric fame, was unearthed in 1939, revealing more than 600 clay tablets inscribed with a mysterious script that has come to be known as Linear B, the first written language in history to use syllabic signs. 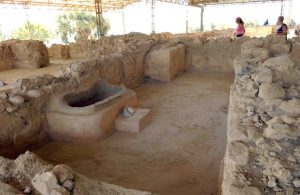 Built around the 12th century and dedicated to a local saint, this charming small church on the border of Messinia and Arcadia is the site of a “miraculous” phenomenon: 17 mature trees grow from the roof of the church with no roots visible either inside or outside the structure. 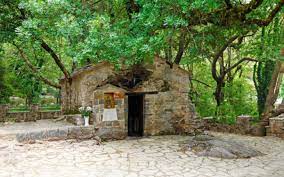 The first in Greece to be listed as a UNESCO World Heritage Site (the Acropolis of Athens was listed one year later), located high up in remote mountain terrain, the Temple of Apollo Epicurius at Bassae (420-400 BC) is the work of Ictinus, one of the principal architects of the Parthenon, and ranks among the best surviving examples of Classical architecture. 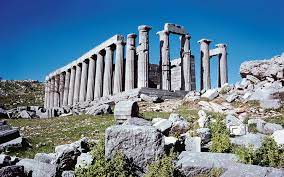 A new point for the development of creativity and expression in Messenia dedicated to the art of photography as captured by Panos Eliopoulos.

The Museum of Pylos is located in the city centre and is accessible from the road leading to Methoni, on the right of the Three Admirals’ Square. You will see the museum on your right.

The museum’s collections include archaeological artefacts which were excavated in the area of Pylia and dated back from the Neolithic Era to the Roman period. Among the exhibited artefacts, there is an abundance of votive gifts from the vaulted tomb found in Voidokilia and Koukounara, along with a plethora of vases, jewellery, spearheads, golden objects, animal representations in relief etc. Additionally, finds from Nisakouli in Methoni, Vlachopoulo, Tourlitida, Soulinati and Korifasio are also in display.

The archaeological museum of Chora is located in Chora and has exhibits from the Bronze Age and the Mycenaean period. It was originally built to exhibit the finds of Carl Blegen and Spyridon Marinatos after their successful excavations at the Palace of Nestor and in the wider regions of Pylia and Trifilia. Bust of both archaeologists can be found on the steps leading to the entrance. Its three consecutive galleries house many gold artifacts, amphorae, murals and casts, and the finds are grouped by the location where they were found. 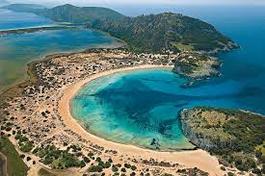 A key stopover site in the flyway of migratory birds, the Gialova lagoon, Greece’s southernmost major wetland,has been declared an Important Bird Area (IBA), providing shelter to 271 of the 442 recorded bird species in Greece and supporting a mosaic of habitats. It is the only refuge in Europe of the African chameleon, a unique species of reptile that changes skin color depending on its mood.

A sandy beach on a stretch of pristine coastline. 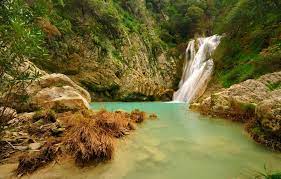 Proti is a little island directly across from the fish village Marathopoli with virgin beaches and the Monastery of Assumption of Mary. 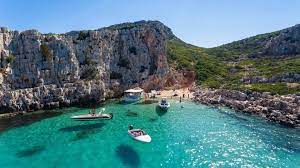 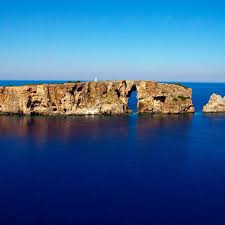 Greek island off the southern coast of the Peloponnese, near the city of Methóni.[1] It is administratively part of the municipality of Pylos-Nestor, in Messenia